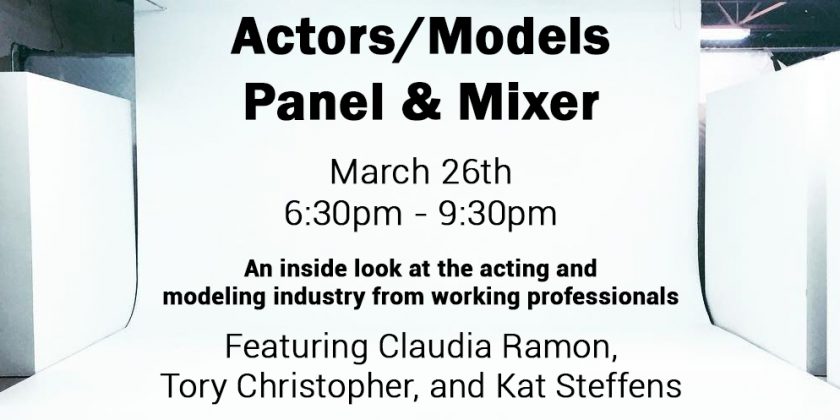 The panel discussion will focus on the business of becoming/staying a working Actor or Model. They’ll talk about the lessons they’ve learned and share tips they’ve picked up from their years in the entertainment industry. There will be an audience Q&A after the panel.

Our speakers will be covering a wide variety of topics for actors and models in a one-hour panel:
Business of the working actor
What to expect from an agent/agency
Expectations vs. Reality
Dos and Don’ts of an Actor/Model
Working as an Actor/Model in San Antonio
Headshots/Comp Cards
Do I need to move to LA?

Snacks and Beverages will be provided.

We will also have plenty of Hand Sanitizer for all who attend.

Condra Artista (https://condraartista.com) has been a premiere talent agency in San Antonio for over 35 years and is proud to have the credibility and connections to work directly with local, regional, and national casting directors. Condra Artista is a full-service talent agency representing talent in commercial work, film, industrial, print, and local productions. Claudia Ramon Owner/Agent has been heading the agency since 2017 and is committed to enhancing the image and position of the agency in addition to maintaining a supportive environment for our talent.

Kat Steffens has a decade of professional acting experience on stage and on screen (most known for playing Jackie Kennedy in the Tom Hanks produced movie PARKLAND starring Zac Efron, Paul Giamatti, Billy Bob Thornton, and Marcia Gay Harden). She also works behind camera through her production company Fadò Films. She has a BFA in acting from The Theatre School at DePaul University in Chicago with a minor in Digital Cinema Screenwriting; Postgraduate studies in Shakespeare, improv (Upright Citizens Brigade LA), and 2 years working for top LA on set camera acting coaches. She’s putting all of her acting method training to good use by offering professional-level training to local San Antonio talent while taking a break from acting herself to grow her family. She teaches group classes for adults, teens, and preteens (To schedule a free consultation or to learn more, call or text 312-810-9040), offers private audition coaching and taping services, and also enjoys working with non-actors using acting methods to improve emotional intelligence and wellbeing.

We look forward in seeing you all there!