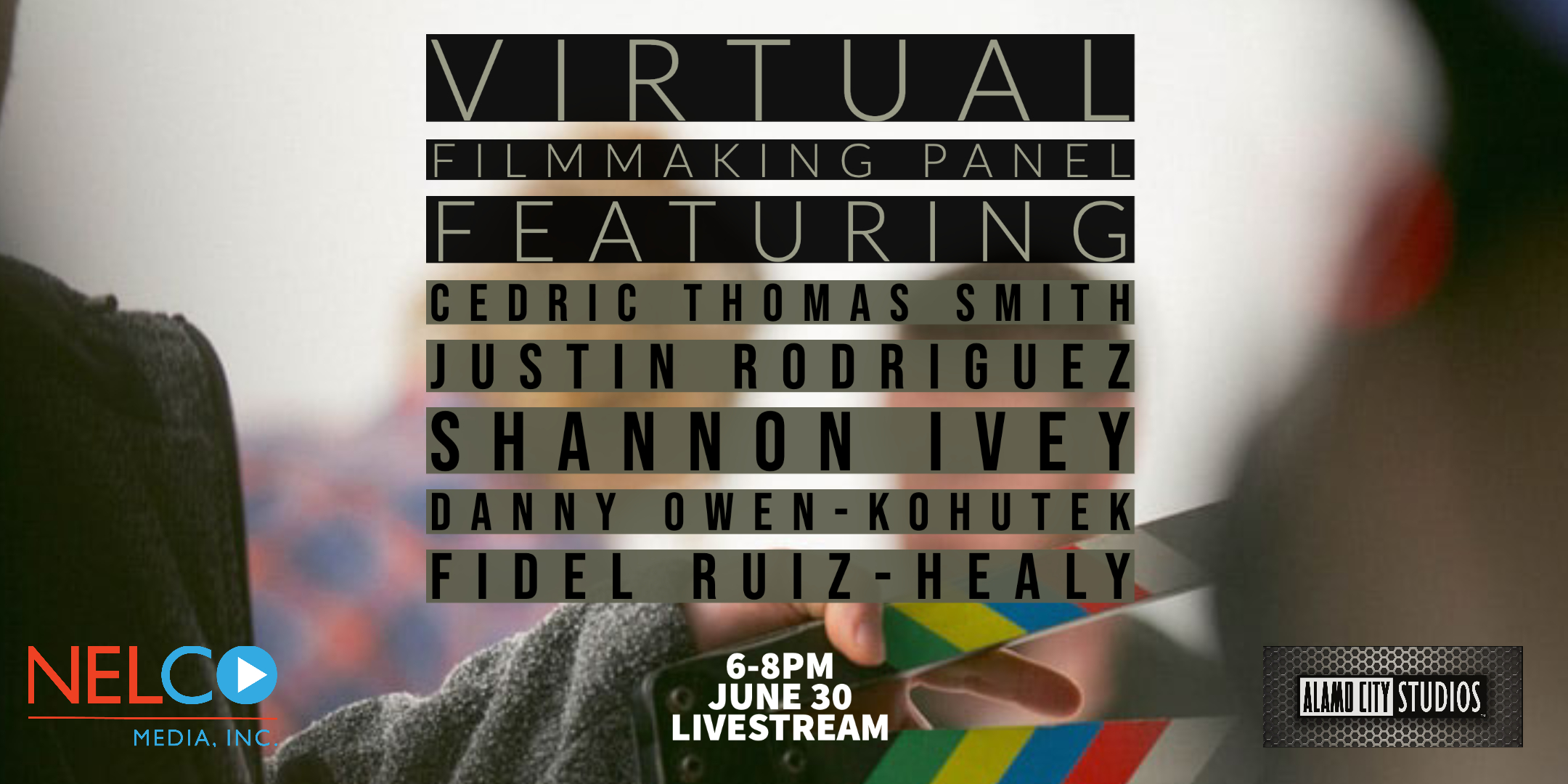 Let’s Have A Conversation

Join us for a Virtual Filmmakers Panel / Tuesday June 30th from 6pm-8pm.

The panel discussion will focus on the filmmaking journey, during these exceedingly difficult times. How have they been able to adapt and overcome to continue to tell their stories. What experience and thoughts they have in the dynamic shift that has happened to our industry and community. What does the future hold for the indie filmmaker in these forever changing and evolving times.

Fidel Ruiz-Healy is an award-winning Mexican-American filmmaker from San Antonio, Texas and an alumni from New York University’s Tisch School of the Arts. After Graduating NYU, Fidel founded the creative collective The American Standard Film Co. (www.theASFC.com), alongside partners in crime Tyler Walker and Jordan Michael Blake. Work developed with The ASFC has screened at such film festivals as SXSW, Slamdance, Hamptons International, Fantasia, Palm Springs, and Mill Valley, been featured in publications ranging from NPR, Vice, Pitchfork, MTV, Filmmaker Magazine, NYLON, LA Weekly, along with numerous credits on Vimeo Staff Picks. The ASFC’s work has generated nearly 20 million views across various platforms. In 2017 Fidel was named the best San Antonio Filmmaker by The San Antonio Current. In 2018 he and co-writer Tyler Walker were selected to be fellows of the NYU development lab with their script, Orinoco Flow. He currently resides in Brooklyn, NY where he works as a freelance Director and DP.

Multi-award winning writer, director, and producer Cedric Thomas Smith is a San Antonio native whose journey into film began in 2010 with a short film on LGBT domestic violence that he’d written, “Unimaginable”. Cedric began directing his own works with films that have won over 40 film festival awards including “The Symphony of Silence” and “Melissa” (both examine the epidemic of teen bullying), the feature film version of “Unimaginable” and his latest film, “Breaking Brokenness”, which is about the pattern of abuse wrapped up in secrets and lies within a family. Cedric’s goal is to continue to write, direct, and produce films that entertain yet give voice to those that feel voiceless.

Shannon Ivey works as a writer, director, actress, and CEO of Theatre For Change-a 501c3 committed to linking social injustice to film and theatre in North America. Shannon has devoted her life to arts for social change and continues to give voice to victims of human trafficking, abuse and neglect, domestic violence, childhood cancer, foster children, and immigrants along the Texas border. Shannon holds a double B.A. from The University of the Incarnate Word and a Master of Fine Arts in Acting from University of California, Irvine. She has worked professionally as an actress, writer, director, and producer in Texas, New York and Los Angeles for ABC, CBS, CW, Showtime, WB and Equity Houses all over the country.

Justin Anthony Rodriguez was born and raised in San Antonio, Texas and is one of the up and coming director’s in the city. Last year was a good year for Justin Rodriguez as he won the SA Filmmaker Grant for his second short film GLOSSOLALIA w/ already 6 festival selections and counting. Also, last year he was nominated for a lone star Emmy for his job (as a Technical Director) at NBCUniversal. Watch out for this director that uses realism and rawness as the themes for his films.

Danny attended college at St.Mary’s University. It was there that he found his passion for video could become a career. While attending college, Danny took two internships in NYC; Comedy Central (on-air promotion) and Late Night with Conan O’Brien. The internships taught him advanced editing, camera work, production and how to eat bagels while sprinting to the Subway station. After college, Danny decided to pursue his passion and became a full-time video producer. Since starting DEKO 37, Danny has done videos for a wide variety of clients, including politicians, non-profits, realtors, and others including TEDx San Antonio. He has produced videos from all over the world and is currently working on a documentary called Abandoned Love.