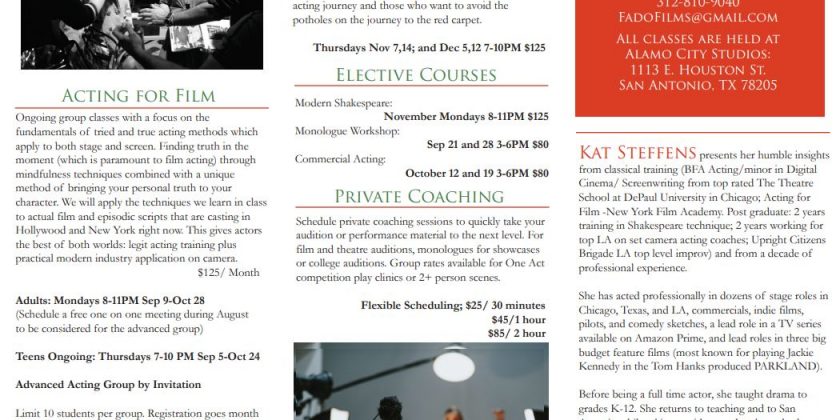 ACTING FOR FILM ONGOING TRAINING PROGRAM:
Ongoing group classes with a focus on the fundamentals of tried and true acting methods which apply to both stage and screen. Special focus is placed on finding truth in the moment through mindfulness and bringing your unique humanity to a role, which is paramount to film acting. We will apply the techniques we learn in class to actual film and episodic scripts that are casting in Hollywood and New York right now. This gives actors the best of both worlds: legit acting training plus practical modern industry application.

Advanced Acting Group by Invitation
Limit 10 students per group. Registration goes month to month. Current students will have priority in continuing in their reserved spots before waitlist students are accepted into the following month. November and December 2019 will be focused on electives, then the next Ongoing Acting for Film session will begin January 2020. The full training curriculum for Level 1 takes 9 months to complete, but they do not need to be 9 consecutive months. For example, if an actor is in a play or books a feature and is out of class for a month, they can schedule makeup classes to catch up when they want to join their group again. Schedule a FREE initial meeting to discuss your goals and see if this program is the right fit for you.

January 2020: Adding 1-2 new Saturday Sessions for adults and teens; and potentially another evening class in addition to the Monday and Thursday groups.

WHAT STUDENTS ARE SAYING:
“Working with Kat has brought out the actor I never knew I was, and the person I’ve always wanted to become.” –Leah S.

“Kat is a consummate professional. She cares about the whole actor: mind, body, and spirit. She provides enough tools to prepare an actor for any given situation they might find themselves in in the audition room or on set.” –Kacey R.

BUSINESS OF THE BIZ:
How to navigate that winding, broken road to Hollywood. This course will focus on all the other stuff it takes to become a working actor besides having talent. Designed for those who are just starting their acting journey, those who need to get their act together, and those who want to avoid the potholes on the journey to the red carpet.
Thursdays Nov 7,14 and Dec 5,12 7-10PM $125

She has acted professionally in dozens of stage roles in Chicago, Texas, and LA, commercials, indie films, pilots, and comedy sketches, a lead role in a TV series available on Amazon Prime, and lead roles in three big budget feature films, working with several celebrities (most known for playing Jackie Kennedy in the Tom Hanks produced PARKLAND).

Before being a full time actor, she taught drama to grades K-12. She returns to teaching and to San Antonio while taking a mid career break to play her dream role of a lifetime: mother of two babies. While she plans on returning to professional acting in a few years, Kat also is passionate about directing and writing screenplays. She has several projects in the works through her production company Fadò Films.